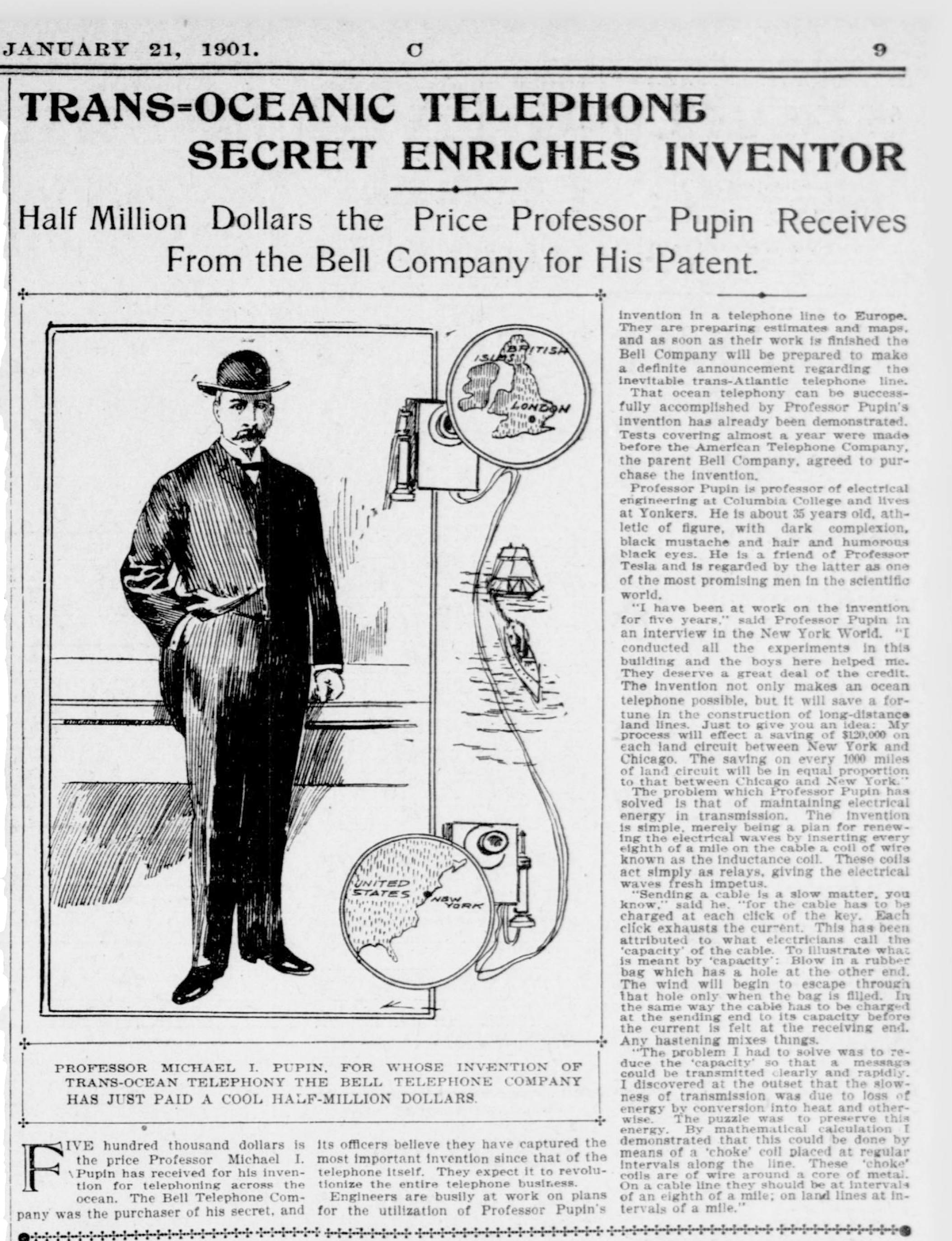 Through the long documentary movie about Michael Pupin all broken threads of the Serbian, American and the world history are connected when facts are in question because it shows Pupin’s all-inclusive portrait as versatile personality. Filming locations show that it is an extraordinarily significant world project, not only Serbian-American one, that has a true movie theater dimension. The film about Michael Pupin reveals the secret how success can be achieved, from a kid in Idvor to the very top of the world. There is no better description of that road on which the destiny itself goes.

“Ph.D. Michael I. Pupin of Columbia University whose invention, “Pupin’s coil”, is considered to be one of the most important inventions which permitted continental telephony and which American Telegraph and  Telephone company demonstrated last Monday, thinks that wireless telephone will be used for every talk at great distance in very near future. Doctor Pupin stated last night that he is working on perfecting the device for wireless telephony which will, as he states, permit talk at practically any distance. 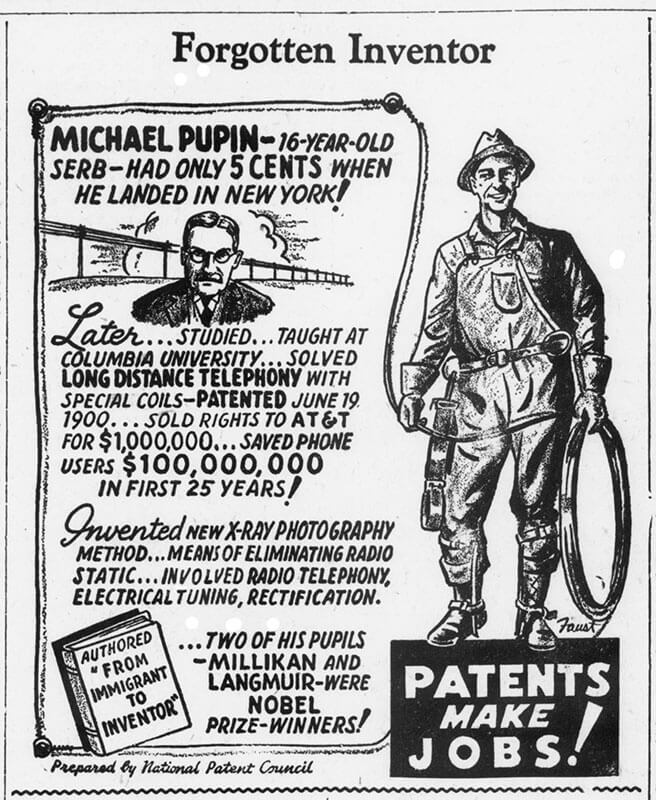 Judging by this inventor this means that the long discussed telephone cable under the Atlantic Ocean will never be laid. People will talk from New York to Londoners, without wires, long before any talk through cable will be realized, thinks Dr. Pupin. He also believes that wireless telephony at great distance will replace wire transfer on the land also.” (The New York Times, January 28, 1915).

“At a recent International Congress in Paris European telephone engineers have accepted the American method of telephone transfer with the intention of uniting all big European centers into one telephone community.”

“Telephone cables which will be used for that purpose will be internationally named “Pupinized cables”, a very gracious complement to me, which, I must admit, pleases my vanity, but I declare in my sincerity that the name “Maxwellized” would be more appropriate.” (The New York Times, December 28, 1926).

Most of the scientist’s inventions contribute in a practical way to the total human welfare. We owe Pupin for the complex thought up loading coil which enables a great range for the distant telephone; for the combination of fluorescent screen with the X-ray which made hidden bodily organs visible, and other discoveries that deeply affected our everyday life.

Dr. Pupin’s “intimacies with immortality” began when, as a little boy, he was guarding his father’s sheep in his native Idvor. During, for him, long summer nights while he was thinking about stars he would hear echo of the church bells.

“It seemed to me then” he remembers, “that light and sound are a way of God’s speech and therefore the two questions: ‘What is light?’ and ‘What is sound?’ were filling my watchful thoughts and penetrating my dreams.” (The New York Times, March 14, 1935).

“With Dr. Pupin’s death the science lost an unusual mathematical physicist, technics a great experimental inventor, and the world one noble natural and spiritual philosopher.”

Pupin’s most valuable students were: Dr. Robert Milliken who measured the potential of the electron, Dr. Irving Langmuir who gave the world the incandescent light to the world with his work with tungsten, and Dr. Edwin H. Armstrong, who gave the world ultra shortwave radio in spite of  all the obstacles, after passing through Pupin’s hands.

"The great things which he ac-teomplished  and the honors which deservedly came to him in the New World never made him unmindful of his friends in the Old World or forgetful of those among whom he lived as a shepherd boy on the plains of Serbia, and he proved his loyalty by acts of sacrifice and devotion which few have equaled. And neither did his gifts of intel­lect nor his scientific knowledge blind his eyes to the Divine reali­ties or weaken his religious  faith.

We give thanks fo- his life and service among us, and for his wit­ness as a faithful and believing Christian who was not ashamed to confess his dependence upon Al­mighty God.”  (THE NEW YORK SUN   15. 03. 1935.)

There is a tall spacious building at the Columbia University, built in 1927 in which there is the Department of Physics since it was built. After Pupin’s death in 1935 in his memory and in respect towards Michael Idvorsky Pupin it was given the name Laboratory for Physical Sciences “Pupin”. He was a member of the Columbia College since 1879, later as a Professor of that College – later University of Columbia. He was a scientist, inventor, writer, world known lecturer and humanitarian.

When Michael Pupin returned as a Doctor of Philosophy (Ph.D.) from Berlin and became a professor, Columbia was a college and lagged far behind other American colleges. Since then, Columbia College has risen with him, and he with it, as the American proverb about great people says best: 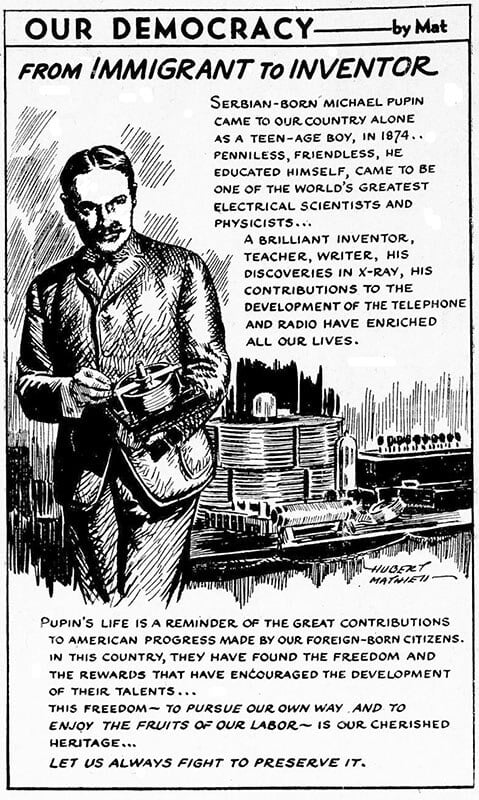 "Go to a region that will grow with you!". Today, Columbia is one of the largest universities in the world, and Michael Pupin, a former Doctor of Philosophy, today holds almost two dozen honorary academic titles.

As part of the 100th anniversary of the birth of Michael Idvorsky Pupin, the Association of Cadets of the Faculty of Engineering at Columbia University in 1958 established "Michael I. Pupin's Medal of National Merit "

As financial means are always a problem to finish the already started movie, same has happened to us with the long documentary film “THE BRILLLIANT MIND”. I filmed ten documentaries about eleven painters and sculptors so it was normal for me to do Pupin’s illustrated monograph “From Immigrant to Inventor” because parts of the Monograph are like paintings and photographs of the monasteries and people’s portraits are connected to the movie “THE BRILLIANT MIND” itself.

The Monograph is true Serbian capital work and this illustrated book represents Serbia’s “personal ID card” in the world. It will reach its full weight when the English version of the Monograph “FROM IMMIGRANT TO INVENTOR” (with 160 art paintings and photographs) as the world encyclopedia. We are hoping that selling of both the Serbian and English versions of the illustrated Monograph “FROM IMMIGRANT TO INVENTOR”, as well as sponsors and donors from the USA and the world who will accept the importance of the film, will help us financially to finish the movie “THE BRILLLIANT MIND”.

All generations, especially the young people, should know this film and use it as the example how to choose the right way when they find themselves in a dilemma which way to go. It is an unique film and a real presentation of America and Serbia through the world history that is tied for the life and works of Michael Pupin when reality surpassed imagination.

Producing house “East (Istok) film” has started filming a documentary about Michael I. Pupin. About 45 % of the film is finished. In order to continue and end filming the documentary “The Brilliant Mind” we need a sum of $175,000. We are asking all interested donors and sponsors to contact us and help realization of this world film story. The shooting locationns ad wordly renown personality of Michael I. Pupins speak for themselves.

For more information about the movie click HERE , HERE and HERE (pdf)